It's on everyones lips: wein.kaltern 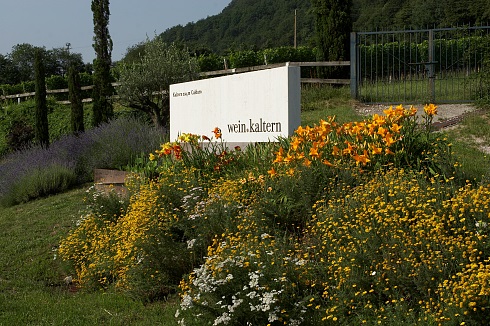 Up to now, wine lovers had always associated the South Tyrolean village of Kaltern with a certain "Kalterersee" wine. But now, Kaltern represents a place that has progressively, uniquely and successfully launched its image as a wine village out onto the international scene using one concise expression: wein.kaltern. This simple insignia, which embodies a complex quality and image campaign, has now made its way into everyday language usage: It's a spoken logo, that stands for something.

Kaltern, located on the South Tyrolean Wine Road, 15 km south of Bolzano, 6,700 inhabitants: In November 2002, Luigi Veronelli, Italy's uncontested wine pope, visited the area around Lake Kaltern, participated in wine tasting discussions and when asked his opinion, responded, I've always been convinced that this region could produce good wines - aromatic and fruity. This is where the Vernatsch grape variety is grown and it is no wonder that a meaningful and identifiable wine with a great personality is able to be born here.

In 1999, several wine enthusiasts teamed up to form Project Group-Wine Village Kaltern: winemakers, tourist agents, farmers, politicians and businessmen from the community recognized that something had to be done with the great opportunity at-hand after a study, commissioned by the local village council, confirmed that Kalltern had immense potential in becoming a prototypical "wine village". At that point, it was clear that something had to be done, and the project group initiated the process.